Meet Marc, the Brains Behind the Antsle Nano 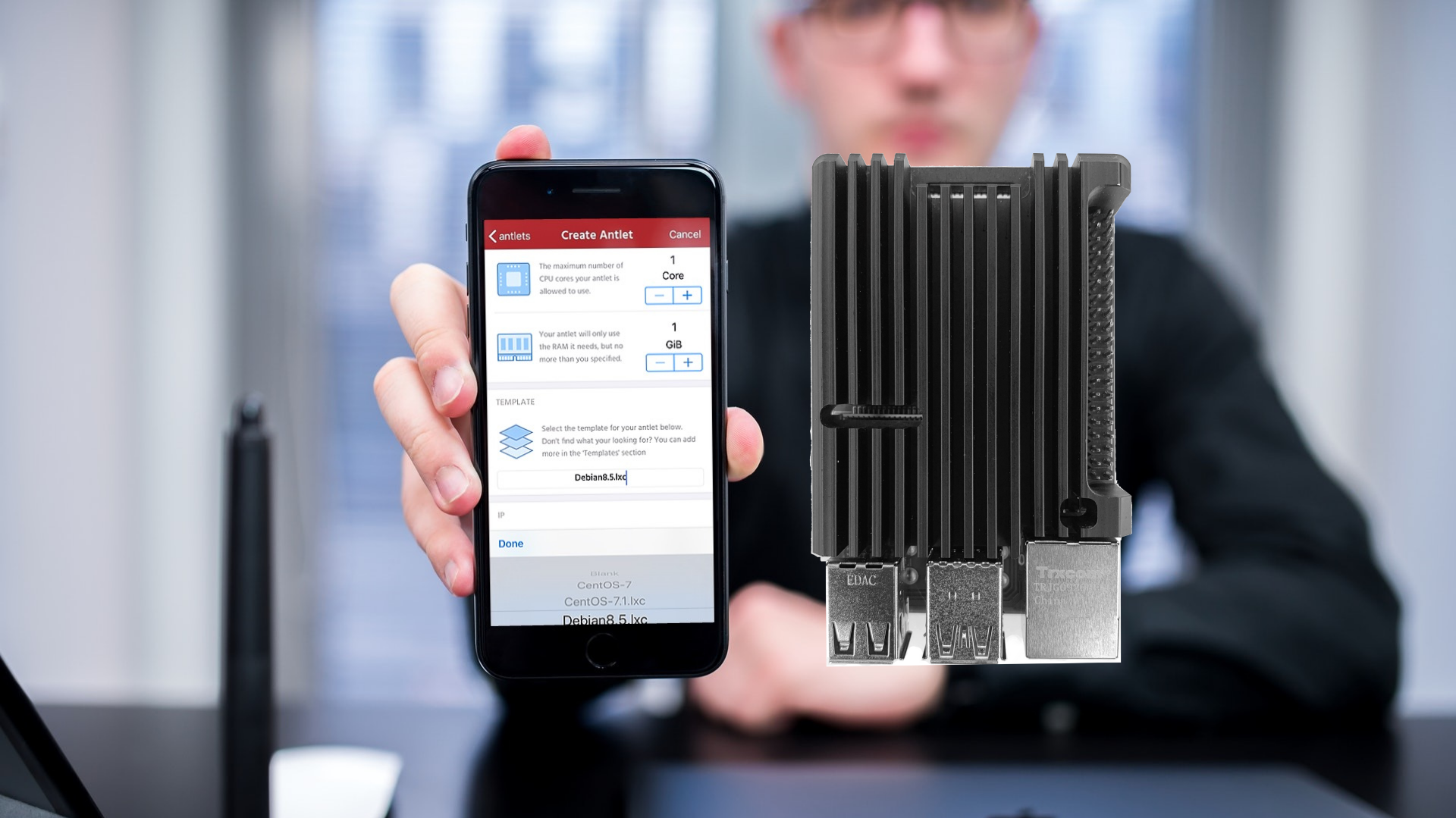 Like with everything worth waiting for, it was a long road to get to where we are today with the Nano. Read about the challenges Marc had to overcome in order to get our intuitive and advanced OS, edgeLinux 2.0, up and running on the Raspberry Pi 4 in our interview below. 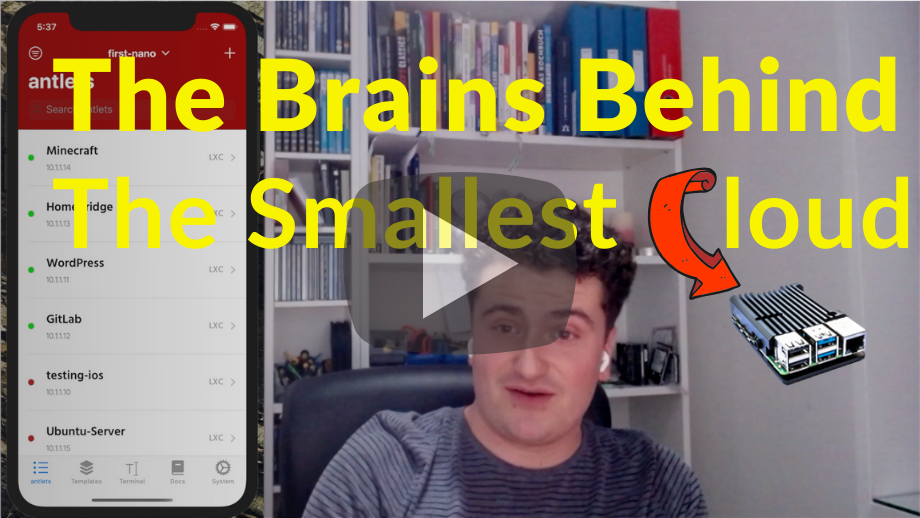 Bernie: Hi guys, Bernie here from sunny San Diego. This is the next video about the Antsle Nano. You wanted to have Marc in the video, so I actually made it possible. He’s going to be joining us today. Let’s get started. I think that’s worth the like, so smash that for this video. Marc, good morning or should I say goodnight to Germany. So the ship date for the Nano is getting closer and our 19 year-old German developer who’s been really involved in the Nano. Marc, maybe you can just introduce yourself.

Marc: Yeah, so in the beginning it seemed like an easy enough task. We already had our Ansible scripts that Mardo created, which in theory at least would allow us to turn any CentOS installation into edgeLinux. So the first step that I naturally thought of was getting CentOS running on the Raspberry PI 4. Unfortunately, that kind of turned out to be more of a hassle than any of us initially suspected because there is no production-ready CentOS image that you can just flush on the SD card and boot your Raspberry Pi 4 off. There were a few images for the Raspberry Pi 3, but all of those were only 32 bit and we needed 64 bit in order to run our antMan and all the other technologies that we built. So there were a few people on the forum, especially, um, Pablo Greco, that helped out. Thanks by the way! So these guys actually experimented a lot with 64 bits. CentOS is running on the Raspberry Pi 4 but that was very experimental and definitely not production-ready. Even though that helped us launch in the end, I ended up compiling my own kernel which turned out to be a lot of work. Regardless, doing this had many advantages like compiling our own features that we needed to recommend to the kernel like KVM support.

Bernie: Yeah, we needed that virtualization. That’s a new feature of the Pi 4 because it has the ARM eight which supports our virtualization. But getting that kernel support actually in Linux was not so easy.

Marc: Yes, that’s right. I mean even the default rescue dimension that is meant to run on the raspberry PI 4 only has 32 bit support. There is a 64 bit version, but you need to manually boot it. Even then, it’s only the kernel. So the user LAN is still a 32 bit. After all the challenges that I faced getting CentOS finally running on the Antsle Nano, it didn’t really make it an Antsle Nano yet. So all I had at this point was basically a Raspberry Pi 4 running a CentOS version. So the next idea was to simply pull out the Ansible scripts, and run the playbook on the Antsle Nano and then end up with the actual installation. Turns out again, it wasn’t so easy.

Marc: So there were a lot of packages missing, including ZFS, just for the architecture which is why I basically ended up compiling ZFS from source… at least I tried. It turns out that even the compiler that I had available for the architecture was over four years old and therefore we had to compile my own compiler simply to get to the next step. So at the time, it seemed like you solve one problem and two more unfold themselves. I was trying to compile ZFS and I ran into another issue, so I wouldn’t even get past the configure script because it was saying the kernel headers that I installed manually weren’t detected even though everything was in the right directories. So, I then ended up going back to my cross compiler and creating RPM packages so that I could install them via yum and that they would be recognized by the system.

Marc: That then finally did the trick for configuring the ZFS modules, which then allowed me to compile them. Then I had ZFS up and running. But again, that was only one next step in that long road to getting from Raspberry PI 4 to an actual edgeLinux running on the Antsle Nano. So there were a lot more challenges involved but I’m trying to keep it brief. It took me quite some time to get to where we are right now. In the end, everything turned out great. I have actually five Nanos running running with edgeLinux right now and it’s pretty amazing. If you think about it, to have all that amazing functionality and all the features that we all know running on that tiny device is really worth the effort in the end.

Marc: Yes, templating has been very exciting actually. So I mean, we have our usual suspects, especially in the LXC branch, those super lightweight containers. We have Ubuntu server, we have Debian, and we even have Raspian up and running multiple containers at the same time on the Antsle Nano. That’s not a problem at all. They’re working great with installations, like websites, Gitlab, or anything else. Then on the KVM side, we have free BSD also an Ubuntu server version. I’m also experimenting with a few other more unusual KVM templates. For example, right now, it’s windows IOT that I’m trying to create a template for and also windows ARM.

Bernie: Yeah, that sounds awesome. So, how did it all work out working in the Antsle team? Did you get the support from other team members that you needed?

Marc: Yeah, yeah, absolutely. I mean, if you think about the size of the project, it’s really crucial to have the whole team working together here. Initially Mardo was a lot of help in getting CentOS up and running and trying to migrate CentOS to edgeLinux because he was the one who authored the Ansible scripts and who had the most experience with running CentOS on our hardware and migrating everything over to edgeLinux.

Marc: As we talked about, there were a few other hurdles that we needed to face. That’s where Joe, another developer on our team, actually came in very handy. He’s been working a lot with getting admin running, checking the dependencies that we required, and helping us all realized we didn’t have the right dependency because it simply didn’t exist for the architecture. He was a lot of help in changing the antMan code in a way that would allow us to have it running on that kind of changed environment.

Marc: Then I’ve been working closely from the beginning with the marketing team and just figuring out what do we actually want to do? How do we want to present it? What are the features supposed to be? And when talking about features, obviously Mario who has been working in our support for the past few years, and the other members of the support team have been just figuring out what the priorities are here. They helped with questions like what do we need to do to end up with the best product possible.

Bernie: And I guess also from support, all the input that came from Mario and his team is what makes our product mature. Right? Getting all that feedback from our customer and incorporating it.

Marc: Yeah, I couldn’t agree more. I mean all the customer feedback has been phenomenal and has really been a key motivation. People showing us and people telling us that we’re doing something right has been super helpful.

Bernie: So I hope you enjoyed me bringing in Marc. I’m really, really thankful he got through all those challenges in such a short time so that we now can actually focus on the logistical aspects of pushing out those Nano orders that we’ve already got. We’re also going to obviously work on the regular offer for the Antsle Nano. So right now, just a few of you have been able to get a hold of it through the black Friday offer. What we’re working on is something that stays there as an offer permanently. So stay tuned. You’re going to hear about that offer later this January. So please also subscribe to our channel. That helps us grow and helps you to not miss any of those videos. Also hit that bell notification so that you can be notified by YouTube every time we upload a new video. That’s it. Oh wait one more thing. Marc would like to give you a quick preview of what’s coming. All right, Marc

Marc: There is one more thing. Basically just a sneak peek. As some of you maybe have noticed, we’ve been working heavily for the past few months on improving the admin API. That’s when we kind of came up with another idea or an idea for another project. That idea is having antMan running in your pocket. As I’m a huge fan of Swift, I basically started experimenting with an iOS app. Today, I’m here to give you a very quick preview. If you look at the simulator here, we’re actually connected to the Nano. We have five antlets running on there right now. You have the option to sort them, to filter them, create a new one, connect multiple notes, and look at the details. It is super cool.

Bernie: Hey, Mark, Mark, Mark, stop it for now. Restrain your enthusiasm because we’re going to make that special video about the iOS app. Let’s do it in the next video.

Stay tuned for more news on the release of the Nano and the IOS app. Leave us your feedback down below on a comment, and go subscribe to our Youtube channel. Also, smash the like button on our video. See you next time. Bye.