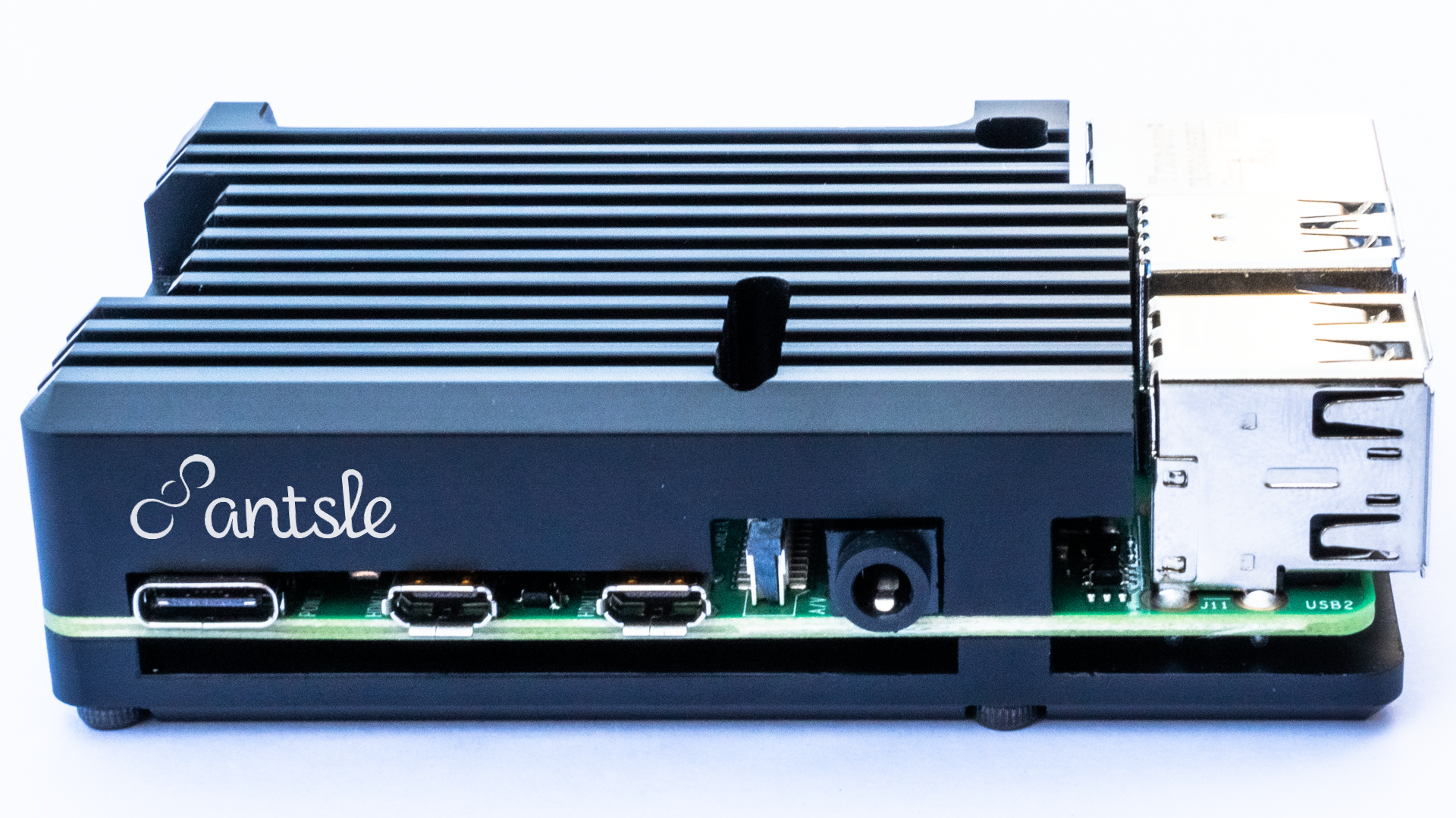 In a recent video, I told you about how we migrated everything from a Gentoo-based OS to a CentOS-based OS. With this new CentOS approach, we decided to compile our edgeLinux and CentOS based edgeLinux on ARM architecture. We are a big believer in ARM architecture and server sides. We also feel confident that ARM architecture has a bright future going forward. Looking further into ARM, it worked like a charm for the purpose we wanted it to serve. So, the question to us was, “What ARM hardware could we use to demonstrate that?”

We came up with the Antsle Nano. It’s that proven, fanless design that you all know from our Antsle One line. We’ve used that same approach here. It’s completely fanless, with four gigabytes of Ram. It has a quad-core processor, hardware virtualization, 64 bit architecture, and comes with 512 gigabytes of storage on that micro SD card. That’s half a terabyte of storage on this Nano device, and it’s all turnkey! It comes with the storage, the power supply, and the case, which is the heat sink just as we have in the Antsle One. It even runs edgeLinux with all the enterprise features and software-defined networking.

The Nano will also allow for clustering capabilities and multi-device management. Having said that, it’ll still be simplistic and intuitive to provide a very seamless experience. EdgeLinux and antMan come pre-installed and the SD cards are already inside, so all you have to do is boot it up. The Nano also has proven ZFS enabled, and you can create snapshots and templates instantaneously just like with our other models. There’s many use cases where such a device will actually work in production or development. It can also be an gateway device to get acquainted with edgeLinux and antMan.

Based on the Raspberry Pi Four

Many of you have seen that it’s based on the Raspberry PI four, so it has that ARM V-eight hardware virtualization, sixty-four bit architecture, with a quad-core. It also has two HTMI ports which allow for the ability to run two 4K monitors, as well as two USB 3 two USB 2, with a gigabit ethernet, all onboard.

When Will it be Available?

The question that has been asked lately is, “When is it going to be available?” The hardware is already in place, and we’ve ported our CentOS-based edgeLinux, ZFS, and open vSwitch integration, and clustering capabilities onto a prototype. However, it won’t be available to the public until January. One small thing we’re still working on is porting KVM using the hardware virtualization of the RMV eight.

If porting KVM is still in the works come January, you would be able to use edgeLinux and antMan with just the bare metal containerization and the LXE antlets. In that scenario, we would just release a free KVM software upgrade once ready. Of course, the goal is to have KVM ready by the January release.

What use cases would you see for such a device? Please let us know in the comments section down below.

I’d love to hear about the various areas this would be of use and all the possibilities you guys think of that are applicable to you.

Please also give me a thumbs up if you like this article because it really means a lot to me.