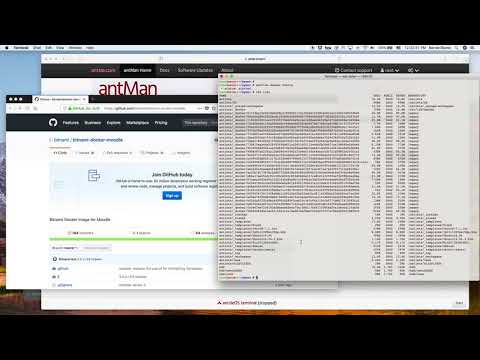 #17: Running docker on your antsle.

Learn how to run docker on your antsle. Install dockerized apps such as the learning system Moodle in a breeze.

Hey, this is Bernie again from sunny San Diego with our next episode of the freedom casts. So what we're showcasing today is how you can run Docker and Docker compose on an Antsle.

So what I've prepared here already is my antMan. It's running on the host master. I have my terminal window here. I'm using this terminal window this time. We could also use the integrated terminal. We SSH into Aster and what we're going to show is installing a system using Docker, and that system is called Moodle. Moodle is a learning management system. So you can publish your own online courses and manage online courses, deliver them to your students and things like that using a prebuilt Docker image for that. What we actually did is we went to bitnami and used the bitnami Docker Moodle image that they have prepared.

So, we just created that. It’s in this directory. We downloaded the Docker images from bitnami, from Moodle, and we also downloaded the Docker compose.yml file and we made a few changes to that. You can see that we use port 80.90 for our test purposes to run Moodle on. We also see that Docker is running on the Antsle. Antsle fully supports Docker. So it started and we see that Docker is fully integrated into Antsle. It’s using the ZFS file systems. If you do a ZFS list on the Antsle, you see all our templates and antlets down here and you see antlets_docker. In there, you have all the Docker images, Docker containers, and stuff like that… each of them in their own ZFS file system. So that's actually really cool. We have ZFS not only for antlets, but we have ZFS also for Docker. So all we have to do now is do a docker compose up in order to start our Moodle learning management system. It's going to do a few initializations. It says starting Moodle.

So, now, I can just use a new browser tab and go to aster.local.port.80.90 (that's the port we assigned to our Moodle learning management system). And here we are. So that's our admin user and we can create our site, upload courses, etc. It was quick and easy. Enjoy your Antsle and if you liked the video, please remember to hit the like button in YouTube. Subscribe to our channel and tell your friends about it. Share it on social media and leave us nice comments. Thanks for now. Bye.

We use cookies to ensure that we give you the best experience on our website. If you continue to use this site we will assume that you are happy with it.
OkPrivacy policy