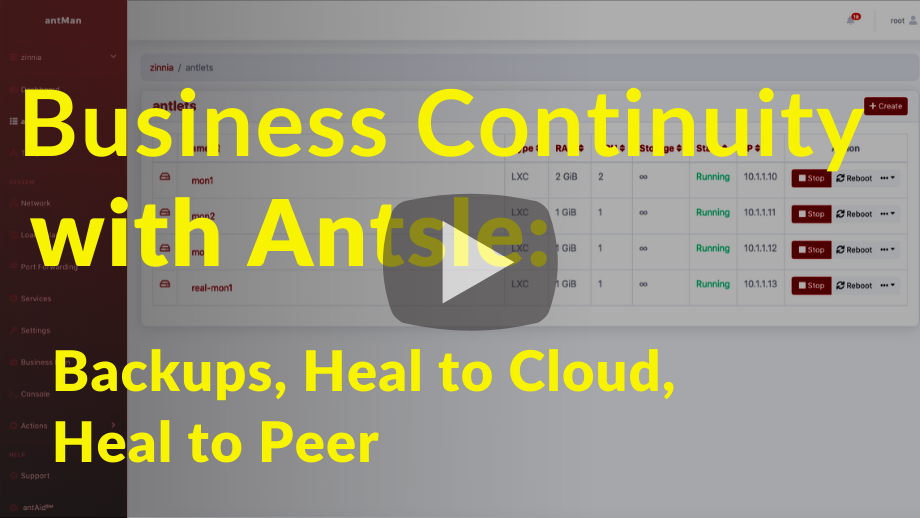 Learn what Antsle has to offer when it comes to Business Continuity.

Hi, it’s Bernie here from sunny San Diego. What's up you guys? Welcome to our latest FreedomCast about Antsle business continuity suite. What is business continuity? Well, it's basically, what it says. You want your business to run continuously, even if a server goes down, be it a cloud server or an on premises server. If it goes down, you don't want your business to have any downtime, you want to have it run continuously. I'm gonna show you how Antsle solves that important problem.

So part of the problem is taking backups and the other part of the equation is getting those backups restored and finding alternative resources if one of your resources goes down /restoring the backup there and just continuing your business.

So let's get right into it. We have our Antsle here called Aster. Once I login we see the dashboard here with some basic information about the server. We also see our antlets here. Let's check the full antlet list. We see an antlet here named “Blanco,” and besides each antlet, we see that little backup icon here. That's how easy it is to take it back up. Just click on that icon and then you’ll see one backup here that we already took. Let's take another backup.

Now we come back up to the Antsle cloud or to some self-managed storage. Self-managed storage means you provide the storage space. So that could be your local space on your server. It could be some external drive that you attached, some NFS Mount, or it could even be on another server that is accessed through SSH. If we click on self-managed here, you see the destination path or there could be an SSH host where we can store the data.

So now we have this new tab here. It's called “heal antlets” so let's click that one. As long as you have a backup, you can heal it here. All backups connected to your anthill account are available to restore. That is super important. We can restore backups even on other physical servers. So that means you can have a backup that was taken on one server and you can restart on the other one as long as all your servers are managed through one anthill account. As a note, we see the Blanco backup here that we've taken. Let's go to a different server. So this is a different server called Iris and we see that backup on Iris as well. If we go to heal antlets here, it’s the same thing as we see what's on there too. We see that Blanco backup here as well, or both of them. We can restart them here as well.

So now I've talked about two parts, taking backups, restoring them, restoring them even on a different machine. The third part is the automatic monitoring and provisioning of other instances. So what we actually do here with our business continuity suite is we monitor your server constantly so we know when it's down because it doesn't respond to our pings. Then, we automatically provision a cloud instance for you. That is a complete, dedicated server at no extra cost. It's all included in those business plans. Then we restore the latest backup into that cloud instance. The cloud instances are running edgeLinux so it's like an Antsle. Your apps are running there until we've fixed the problem on the on-premises server. That’s continuity at its best.

The best way to get as much continuity as possible is to smash that “like” button because it helps the YouTube algorithm. It means a lot to me, and it advances our movement, which is really important to keep things going. So please do me a favor, hit that “like” button.

Things don't end there though. We don’t only provision that other server in the cloud which is called heal to cloud and is a very unique feature. We can also do heal to peer. So you can set things up in a way that if Aster goes down running your antlet, then it will automatically be provisioned on Iris, or on another on-premises server. The backup will be restored there and it will run there continuously.

So that is business continuity. Thank you so much for watching. Please comment down below what you think about it. What features do you need in your use case? What other questions do you have? I promise I'll answer each and every one of these comments personally. All right, thanks for watching and see you in the next video. Bye.

We use cookies to ensure that we give you the best experience on our website. If you continue to use this site we will assume that you are happy with it.
OkPrivacy policy